This was the 16th Arena quick-play competition and despite having two Castlehill TAFCA matches on the same night (Armadillo`s & Bandicoot`s), we had a very respectable 15 players involved!  This has turned into a very competitive and popular weekly event, with not only OTB Castlehill members, but some new online editions to the club! Declan Shafi deserves all the plaudits for setting this up and making it the success it is! He was missing tonight due to playing in one of the TAFCA matches, so the competition was a little more open than usual! 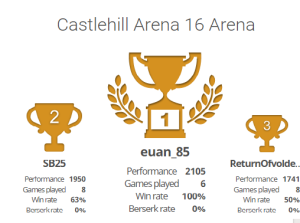 Strangely it was a player who was also playing in a TAFCA match that won it! Yes, Euan Murray had a quick exit from his match and unfortunately for him and his team, he was on the wrong side of it! He consoled himself with 6 wins out of 6 games and finished in top spot on the night. Subhayu Banerjee took 2nd place, while the ever present, Ed Walton got 3rd!

For all the result, standings and if you wish matches, please checkout the Castlehill website under “Thurs night results!”.

See you all again hopefully next week when we do it all again!