Dundee Chess Club had 15 players, while the home team Castlehill Chess Club Dundee had 23 players. In all 19 matches took place with some Castlehill players moving over to Dundee to give everybody a match on the night! This is the best turnout out in a number of years and a big boost for everyone and chess in the city of Dundee.

Congratulations to Castlehill Chess Club Dundee on winning the Bobby Gow Memorial for the 8th time in a row (one match joint winners with Dundee!). 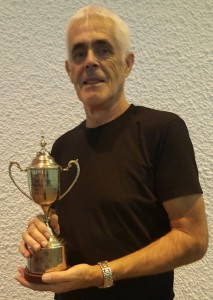 Some great matches played and some good results on both sides, especially Declan Shafi who beat David Findlay, Andy Rowe beating James Anderson and Ray Noble beating Frank Stevenson for the first time ever in over 34 years of playing chess!

The match was a lot closer than the score line suggests but a great performance from Castlehill again and some great banter as well! Dundee as always were great company and put up a valiant effort as always, but this time they just could not match Castlehill.

A big thank you to both chess clubs and players for their support on the night and I hope everyone had a good time on the night!

We did Bobby Gow proud tonight!

We will do it all again next year with Dundee Chess Club being the home venue.