Oh what a night! April shower’s no! April fireworks yes! This was an unbelievable night’s chess with some absolute beauties and some spectacular howlers! It was fast and furious but full of true grit! My night did not start well, 3 moves in and my computer froze and I had to reboot and lost! I know of one other who had to swap computers during play, one player who was in but managed to withdraw and could not get back in! So just goes to show online chess has its own particular problems including mouse slips!

In all we had nine teams involved in this new format and overall I think it went very well. Not to long (1 hour 30 minutes), maybe a bit quick for some (5 minutes + 3 seconds) but most enjoyable indeed!

Congratulations to Castlehill A team for winning the 1st ever official TAFCA Team Battle event and being crowned “TAFCA Team Battle Champions 2021-22! They were the favourites and top seeds at the start of the competition with an average grade of 2200. They had five players in the team, Richard Polaczek IM, Declan Shafi, Andre Babin, Richard Kynoch and Graham Mooney 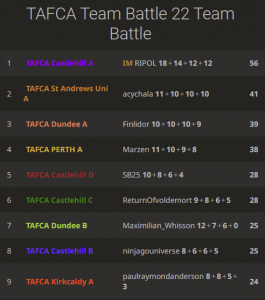 It`s also congratulations to Richard Polaczek IM for winning the individual crown with 18 points! Four of the team of five ended with TPR of 2000+! Indeed 4 out of the five players finished in the individual top 4 places! Can’t as a team do better than that! 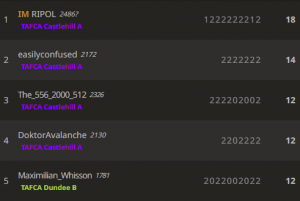 St.Andrews Uni A put up a tremendous fighting performance to take the runners-up spot on 41 points! They were the 3rd seeded team grading wise with an average grade of 1991. They ended up with a TPR of 1976 so on par with their grading but finishing up one place better than their seeding! Well done! Their team had 7 players involved (the second most players) with Elliot Cocks finishing their top player on 11 points, 6th place individually and a TPR of 2413. Wow! Special mention for Jan Thiel who would normally play for their “B” team if they had one entered finished 2nd in the team standings on 10 points and TPR 2140!

Dundee A (They won the trial event in the 2020 TAFCA online summer event) finished in 3rd place on 39 points. They were the number 2 seeds with an average grade of 2104 and did perform closely to that grade with a TPR 2069! They lost out to St.Andrews Uni A for the runners-up spot. Their top player was Dundee Legend and incredible organiser now, David Findlay who had 10 points and 8th in the individual table.  This included two wins over Declan Shafi (Castlehill)! Dundee A had the minimum 4 players in their team.

Perth A finished 4th on 38 points and performed better than their average grade (1813/1943). Martin Gourlay was their top player on 11 points. Perth had 5 players involved. It was good to see Perth entered as they have some very good players!

Castlehill D had a fantastic tournament finishing in 5th place on 28 points, tied with Castlehill C also on 28 points! Castlehill D with a team average of 1585 but a TPR of 1727 punched well above their weight! Subhayu Banerjee was their top player with an unbelievable 10 points finishing in equal 8th place! Eight players made up the team the biggest team in the competition! Castlehill C also played well and managed a TPR similar to their average grade. Ed Walton was their top player on 9 points and the team had 5 players!

Dundee B finished in 7th place on 25 points a little adrift of their grading but still a good performance for a team of 4 players. The outstanding performance from this team and the rest was young Max Whisson J15 who finished top player for Dundee B on 12 points and a TPR of 1965! Way to go Max!

Castlehill B finished on 24 points in equal 8th place a long way adrift of their average team grade of 1826 with a TPR of 1582! Yes a little disappointing but no complaints as most, if not all under performed on the night! Rishi Vijayakumar finished to player on 10 points and 6th place in the individual table! Six players made up the team on the night.

Kirkcaldy A took 9th place with 24 and finished in equal 8th place with Castlehill B! Paul Anderson finished top player on 8 points and the team performed to their average team grade of 1547! Four players made up the team.

In the individual table it was a Castlehill A 1st  (Richard Polaczek IM) 18 pts, 2nd  (Andre Babin) 14 pts and 3rd equal Declan Shafi & Richard Kynoch (alongside Max Whisson (Dundee B) on 12 pts.

A big, big thank you to all the players and teams that supported this last TAFCA event of 2021-22. You are what make it a success!

For the full table’s (teams & individual), results, games and a whole load of other information provided by Lichess like 179 games in total were played! Click the link below to take you there and read on McDuff!

For the full report click the link below! When in the event, click on anything that lets you and you will be amazed how much information is there on the teams and the individual players!