Twas the night after all the fireworks that Castlehill B travelled to Newport to face the Newport Knights A team. Would this be a damp squib? Or would someone produce some fireworks of their own!

Castlehill B like the rest of the Castlehill teams are grading wise a bit weaker this season, with the loss of Declan Shafi, Euan Dawson, Tom Constance, etc, etc (That`s one for you Marcus, The King and I!).
As is the norm at Newport of Knights, the venue was excellent; the hosts were magnificent and the food and beer (ask Ray!) were superb! No place like it on that front! It’s a tough division and if our “B” team was going to compete this season we needed to take something from one of the weaker “A” teams grading wise in the division (No offence lads!).
BOARD ONE
This was the first match to finish and what a result for that old hacker, Ray Noble (1536) beating his more illustrious and higher graded opponent Lloyd Hughes (1780)! Ray playing against the Caro-Kann, always seemed to have the edge which he converted this time (normally he folds like a pack of cards!) despite his opponents handing him Lager after Lager (Hic!).

Newport Knights A 0, Castlehill B 1

BOARD TWO
Keith Rose (1529) with the black side had his ups and downs in this match but kept his nerve and made sure Douglas Cairns (1447) paid the price for the last error (Bishop forking Queen and Knight) to guarantee Castlehill a draw at least! This match could have gone either way and Keith was happy (relived!) to have won it in the end.

Newport Knights A 0, Castlehill B 2

BOARD FOUR
Newport Knights fight back after Roy Morris (1431); (playing up from “C” team) got himself in all sorts of predicaments against Simon Markham (1402). Simon skilfully took full advantage to win and get Newport back into the match!

Newport Knights A 1, Castlehill B 2

BOARD THREE
Well, well not sure what you can say about this match in the end? Fergus Milne (1526) who has not played in over 2 years approx, looked like he had never been away, getting himself into a winning position against Newport captain, Marcus Wylie (1421), with plenty time left! Marcus was not one for giving up mind you and kept putting pressure on Fergus with every move just waiting to pounce on any crumbs Fergus may throw him.

For some reason Fergus got very defensive making sure everything was tight, then “BANG!” he got his King trapped and that was the end. Everybody was stunned, including Fergus and Marcus! Just shows you it`s not over until the “big person is singing!” (Got to make sure I don`t fall foul of offending anyone these days!).

We have all been here as Ray Noble will tell you. Remember that one against Stuart Blyth in Kirkcaldy Ray? It was good to have Fergus back playing again and playing well!

Newport Knights A 2, Castlehill B 2

Congratulations to both teams for a great night’s chess. Hopefully from a Castlehill B point of view this result will workout as a good result in the end despite it being a missed opportunity!

Once again a big thank you to Newport Knights for being great hosts and players on the night. Always a warm and friendly welcome in Newport!

On another point, Roy Morris was reunited with the Newport Knights Championship trophy which he won in 1975! Indeed he was playing the current trophy holder in his match! Roy where has all the time gone mate? I am reliably informed you were a good player then?! 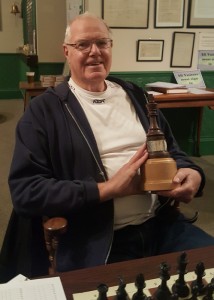