Kirkcaldy Chess Club have a temporary new venue due to fire damage at the St.Clair Bowling Club.  The St.Clair Tavern got Ray Noble’s approval as it had a bar! It proved to be a good venue for playing chess as well.

What a night it proved to be, Castlehill C are the only “C” team in division One and have been punching above their weight for a while now. Out graded on the top two boards, but higher graded on the bottom two, it was always going to be close.

On board 4 Subhayu Banerjee (B) (1403) playing up from our “D” team got first blood for Castlehill C playing an almost perfect game against Euan Henderson (1360). Super “Sub”hayu indeed! 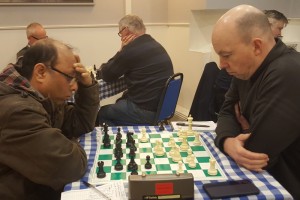 On board 3 Roy Morris (W) (1446) made it 2 nil to Castlehill after Terry Doherty (1391) went to pick up his Bishop but found a Rook in his hand by mistake! We have all been there Terry! 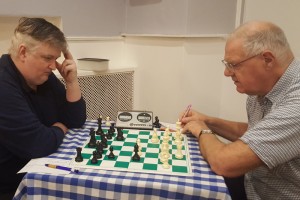 With the draw guaranteed, could Castlehill C push on for the win?

Keith Rose (W) (1495) on board one was up against it with Russell Kynoch (1826) in French. It was nip and tuck but in the end Russell showed why he is graded 1826 and gave Kirkcaldy A a life line in the match! 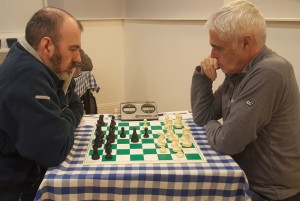 It all rested on the last match on board 2 against Ray Noble (B) (1482) and Stuart Blyth (W) (1589). In a Sicilian with Ray not allowing Stuart his 3.Bb5, it was a close match. It seemed Ray got the edge during the middle game, some would say a winning advantage but not sure that was true. With the clock ticking Ray offered Stuart the draw, but given the situation, Stuart had no alternative but to turn it down! May be he was waiting for Ray to down a few more pints which to be honest was a good tactic, the only one he had it seemed at the time! Well in a tense finish with everyone looking on, Ray did indeed make an error and Stuart pounced on it like a majestic Tiger going for the throat of his victim! All of a sudden Stuart won a few pawns and got connected passed pawns and the game was over, Still Ray did what he always does in this situation and took solace in a pint of bear but not bitter! 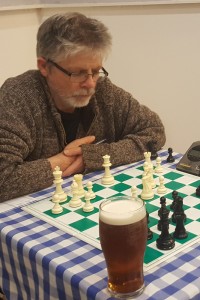 Guess who`s pint and how many!

Before hand Castlehill C would have been happy to get a draw against Kirkcaldy A, but given how things looked they were a bit deflated at the end for the missed opportunity for a possible win!

Another great night’s chess and Kirkcaldy were great hosts as usual and always a pleasure playing them. The St.Clair Tavern was perfect for chess and the Barman did a good job in making sure Ray was well lubricated on the night! You could call him Kirkcaldy’s secret weapon!

The point should be enough for both teams to avoid relegation if as usual only one team goes down which is looking like Kirkcaldy B. But you never know!

Castlehill B were away to current league leaders Perth A. As you would expect our “B” team were out graded on all boards as Perth A had their top 4 players on the night!

On board 4 it was that man again, Ray Noble (B) (1482), playing up from the “C” team. He faced Michael Roth (W) (1597), a player he has never beaten! Michael came out of the opening better with Ray’s pawns split on the Kingside! But Ray kept the pressure up and began to get a foothold in the match as Michael started to falter a bit. It looked like Ray had managed to get the draw, when all of a sudden Michael missed a tactic and Ray won a piece! Ray had a white Bishop and 3 pawns, while Michael had 5 pawns. It was just a matter of technique but than again, Ray and technique? Is that not an oxymoron? In the end Ray did get first blood for Castlehill C! 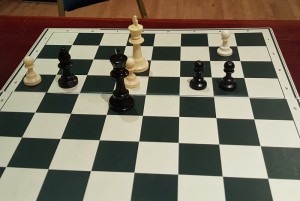 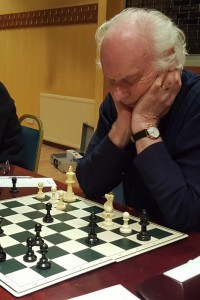 On board 3 Andy Rowe (W) (1545) had a battle on his hand against Perth’s Gwenole Le Feuvie (B) (1612). It looked like it could go either way but Gwenole gradually got the upper hand and got Perth A right back into the match. 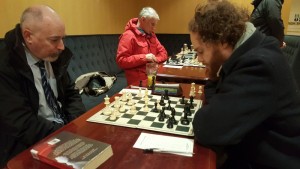 Next to finish was the board one clash between Paul Shafi (W) (1569) and Martin Gourlay (1881). Paul was on song in the opening faze of the game and had a winning advantage in the middle game. Martin was left with no option but to throw the kitchen sink at Paul. It worked as Paul began to lose concentration and confidence and played a few loose moves and then missed something which enabled Martin to win a rook! It was a missed opportunity for Paul but these things sometimes happen as Ray knows well! 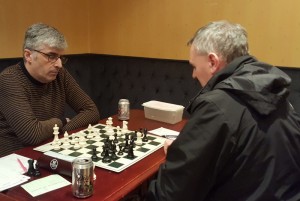 It all rested on the board two match between Robert Jackson (B) (1564) and Perth stalwart David Hall (W) (1704). What a game and what a performance by Robert who just kept carm and played like a dream machine under pressure. Indeed it was David who buckled under the pressure as he make an illegal move which gave Robert an extra two minutes and the game!

A great match and once again a Castlehill team upset the odds this time against the league leaders Perth A. It should have been a win, but that’s the way the cookie crumbles sometimes. Mind you that`s twice in a week a Castlehill team has handed a team a “Get out of jail” card!?

Perth A will be disappointed with this result, but happy that it was not worse! It is still in their own hands to win the league because Dundee A only drew against Castlehill C a week or so ago! (What a night that was!) As usual Perth A were great hosts and always gracious players. For the record black cuffed white four nil in this match!