Monday 28th September 2020 saw the end of an era at Castlehill Chess Club Dundee as one of it`s stalwarts and living legends retired as Club secretary after 39 years service.

During his tenure. Keith was instrumental in helping start up Castlehill Chess Club and building it up to what we have now!  His drive and leadership have made Castlehill Chess Club Dundee, one of the best organised, friendly and competitive chess clubs in Scotland if not the known universe. It was not always easy but Keith’s passion for chess and Castlehill kept driving him on. Keith over the years has been the glue that has held the club together for all of his 39 years of service. Yes 39 years, now that’s what I call dedication! 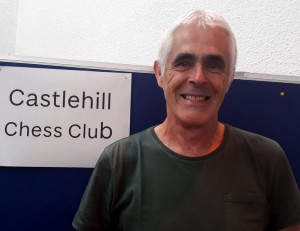 But what he has helped build over the years was not “Just” a chess club, but a chess family and community.  I myself became involved with Castlehill Chess Club in 1985 which was in West Ferry at that time. Keith was there welcoming you to the chess club and making sure you felt at ease. He inspired me to get involved with the club and helped and guided me when I started helping out on a committee level. Because of Keith, I am still here organising and helping to carry on improving the service we offer to our members. We never stand still on our laurels.

While we will miss him at the helm, he can rest assured that he has personally built strong foundations that will keep this chess club going from strength to strength no matter who takes over! He is not leaving us just moving aside for others to build on what he has helped start and nurture over the years.

It would have been nice to have all been together at the AGM in person, but this was not possible due to government guideline. But by the wonders of modern technology we were still able to thank him on behalf of Castlehill Chess Club and all it`s members, past present and future, for all he has done over the years.

Keith`s wife Ruth, presented Keith with a gift from Castlehill Chess Club, thanking him for all he has done for us. He was also made Honorary President of Castlehill Chess Club and I am sure he will still play his part in the club (it`s in the blood!), but from the backbenches now! 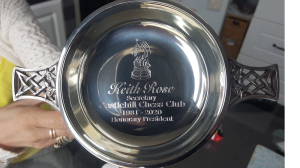 Keith thanks for everything and we will never forget all you have done for us.

Enjoy your retirement my friend! Now you will have time to work on your chess. Always room for improvement!

Castlehill Chess club is flying high and that is because
you have been the wind beneath it`s wings for 39 years!

Thank you and we salute you for everything you have achieved at Castlehill!