Its chess night and that can mean only one thing…Castlehill Chess Club Dundee is open as usual! 26 players made it down and what a night of chess we had in store!

QUICK-PLAY GRAND PRIX
14 players took part in the 5th (last) quick-play tournament of the season. Andy Rowe was leading by 3 points going into tonight. He only needed to avoid staying more than 2 places behind Declan to take the title, but as in life you never know!

On the night Andre Babin proved to be the top player finishing in 1st place, with Declan Shafi in 2nd place. But right behind them in third spot was Andy Rowe and with that Andy becomes the Quick-Play (old 5 minute) Champion 2018-19! Andy won the 5-minute last year and proved here that was no fluke! Well played Andy!

A special mention should be made for Rishi Vijayakumar J7 who finished in equal 6th place on a fantastic 4 points. He beat some very experienced players along the way and is a fine prospect for the future! On the night Rishi was wearing a very bright yellow top, so his nick name for the night was “The yellow Peril!”. 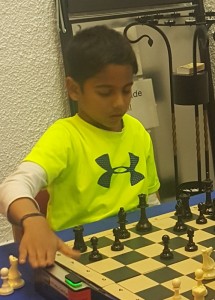 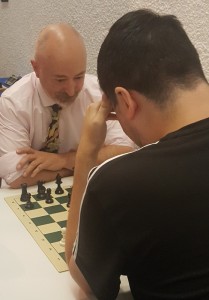 JUNIOR CHAMPIONSHIP FINAL
The start of the Junior Championship final took place tonight with 12 matches in all to play and a time-control of 25 minutes each player. Surprisingly, but in a good way, the juniors took their time during the match and that meant they only played 6 matches (half way) on the night, so will need to come back next week to finish it off!

Ramit Kanodia is the defending champion and favorite to retain his title, but Rishabh Akula will have something to say about that I am sure!

Ramit started his defense off with a win against Krish Akula, while his main rival Rishabh Akula left his queen en-pire against Alexander who dully snapped it off and saw it through to the end! (Oh that must have hurt Rishabh!)

With colours reversed, Ramit made it 2 out of 2 against Krish, while Rishabh got his revenge against Alexander who could not take advantage of his opponent in the 2nd game.

But as always there is a twist in the tail as Ramit on easy street fell for a back rank mate against Rishabh! What a result for Rishabh which brings him back level with Ramit after 3 matches! Krish beat Alexander in the other match.

Six matches left which will be played next week.
It’s still anybody’s championship and it will be a nerve racking finish on the 22nd Aug!

Next week also sees the last round in the Bob Dunn Summer and the Random Knockout Final!