Well it may have been Halloween, but the club was still open and what a night it was with 39 people down at the club!

We had 3 TAFCA matches in full swing, with the club playing host to teams from Dundee, University of St Andrews and Kirkcaldy! Doing Castlehill proud were three juniors on display in Rishi for the E team and Ramit and Charvi in the F Team. An excellent night for Ramit who pulled off a fantastic vistory, and unlucky to Rishi (who nearly was not playing at all!) who was a Rook up, but managed to fall foul to his Queen being pinned to his King by his opponents Rook!

Daniel was this years Halloween Pumpkin, leading the E team to a granny!

Through in the social chess area, we had Ray showing off his recent game against David Findlay, which if he had more time looked like it may have been a promising ending!

We also had two club championship matches taking place in the glass house.

What a night’s chess in Castlehill! 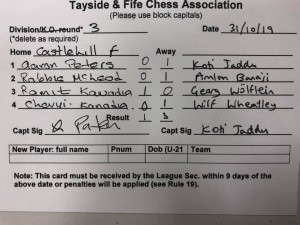