The largest and most active chess club in Dundee. For beginners to Masters,  Juniors to adults. We’re always looking for new members – our membership is around 55 players (35 adults, 20 juniors <17). We have male and female members, the young and the old. Coaching is available.

We are proud that four of our juniors are Chess Scotland Internationalists.

If you want to improve your chess, play casual chess, league chess, or any kind of chess, our club normally meets every Thursday throughout the year (Except Christmas) between 7 pm and 10.30 pm. We are delighted to open our doors again from Thursday 21st October 21 for face to face chess! We also play online as another string to our bow! If you are local to the Dundee area, or a student at Dundee or Abertay Universities, and you are interested in playing online, please contact us. We welcome players of all ages and level of ability.

July 2nd, 2022
THE FIGHT TO PLAY WORLD CHESS CHAMPION MAGNUS CARLSON CANDIDATES TOURNAMENT – June 17th to July 5th July 22 – Madrid Spain Round 11 & 12 Report update  They think it`s all over? Well it is now! Barring the most amazing collapse in history, Nepomniachtch will finish top of the candidates tournament and become the official FIDE challenger to face reigning world champion, Magnus Carlson in 2023 for the second time. He only needs one draw in two games, which is something he does very well indeed!   Mister steady Nepomniachtch has drawn most of his matches and won 5 matches, but crucially after 12[...]

June 30th, 2022
FIDE WORLD SENIORS TEAM CHAMPIONSHIPS Acqui Terme, Italy - 19th – 30th June 22 Time-Control: 90 minutes first 40 moves, then 30 minutes + 30 seconds increment from 41st move Tournament 50+ - 9 rounds UPDATE - Final report! Round 7 and Scotland get back to winning ways with a nice 3 – 1 win against the Polish Amateurs! FM Andrew Burnett makes it two wins in a row supported by Neil  Farrell on board 2! Both players got the full backing from Alan Scrimgour and James Stevenson who both drew their matches! Round 8: Against Iceland, FM Andrew Burnett makes it three wins in a[...]

June 30th, 2022
THE FIGHT TO PLAY WORLD CHESS CHAMPION MAGNUS CARLSON CANDIDATES TOURNAMENT – June 17th to July 5th July 22 – Madrid Spain Round 10 - Wed 29th June 22 Report   Nepomniachtch takes a commanding 1½ point lead after drawing his match in round 10 against  Radjabov as the wheels come off Caruana`s tournament after losing again this time against Duda!  It seems Caruana`s defeat against Nakamura in round 8 has taken all the wind out of his sails and he has nothing more to offer in the candidates! Having said that both players and indeed most players in round 10 were up[...]

June 26th, 2022
FIDE WORLD SENIORS TEAM CHAMPIONSHIPS Acqui Terme, Italy - 19th – 30th June 22 Time-Control: 90 minutes first 40 moves, then 30 minutes + 30 seconds increment from 41st move Tournament 50+ - 9 rounds  UPDATE ROUND 6 Round 6 saw Scotland take on another home nation in Wales Silures. It was a tough battle as you would expect from two teams in the UK, bragging right`s were at stake!   It ended in a 2 -2 draw with FM Andrew Burnett getting his first win of the tournament on board one! Neil Farrell on board two could not hold on for the draw and lost his[...]

June 26th, 2022
THE FIGHT TO PLAY WORLD CHESS CHAMPION MAGNUS CARLSON CANDIDATES TOURNAMENT – June 17th to July 5th July 22 – Madrid Spain Round 8 - Sun 26th June 22 UPDATE What an 8th round in the candidate’s tournament! Leader Nepomniachtchi draws in double quick time, leaving the door open for Caruana to draw level! This will either be a mistake or turnout to be a very smart game plan! The Nakamura v Caruana turned in to one of the best games of the candidate’s so far. In an unfamiliar complicated position for both players, Nakamura was in an attacking mood with double edged chances. Yes[...]

June 25th, 2022
THE FIGHT TO PLAY WORLD CHESS CHAMPION MAGNUS CARLSON CANDIDATES TOURNAMENT – June 17th to July 5th July 22 – Madrid Spain UPDATE: 25/06/22 After six rounds Ian Nepomniachtchi (Russia) leads the field on his own by ½ a point (4½) from Fabiano Caruana (USA) on 4 points. There are still eight rounds to go so anything can happen but if current form continues it’s looking like a two way battle between Nepomniachi and Caruana!   After 6 rounds there have only been six decisive games and 18 draws, with Nepomniachtchi having won three of them! Caruana has won two, while Nakamura (USA) the other[...]

TAFCA AGM and Trophy presentations to be confirmed.

On our website we have a searchable database of games by Castlehill Members.
You can go through the games or download them.
To go to our database you click “Club Info” in main menu and then “View Club Games“.
Or alternatively click “HERE” to take you to the database. 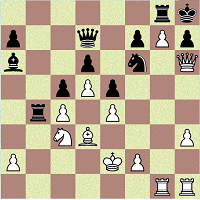 We are always looking for new games, so players please submit your games
and if possible with some analysis or thoughts.
It does not matter your level,  the games are part of the clubs history!